The University of Nairobi fraternity has mourned former Vice Chancellor Professor George Magoha remembering him as a leader full of wisdom.

Through the UON website on Wednesday, the institution officials wrote their condolences to the late professor of Surgery.

“I worked closely with him since 2003 when I joined University management. Prof Magoha was known for his indefatigable defender of whatever he believed in. Prof. Magoha will be remembered for his transformational style of leadership and yet he was humble and cared for the welfare of all staff regardless of their rank and station,” current UON Vice Chancellor, Prof. Stephen Kiama said.

Academic Registrar, Humphrey Webuye, described Magoha as a “Scholar, Medic, and Transformational Leader” who was “energetic, enthusiastic, and very firm.”

He went on to say, “He was nicknamed the “Kifaru” when he was the Vice-Chancellor of the University of Nairobi. ‘No’ or ‘it cannot be done’ were not part of his vocabulary. He was not only concerned with results but was personally involved in the process. He built winning Teams and mentored many leaders.”

Director of Corporate Affairs, John Orindi, shared, “The towering giant has fallen. An honest and dedicated public servant. A no nonsense administrator. A man who believed that the University of Nairobi is the only University in Kenya.”

Njeri Muhoro, remembered him for his advice to “be diligent, to serve to our best, and to fear God.”

Magoha began his career at the University of Nairobi as a Urology lecturer in 1988 and rose through the ranks to become Vice-Chancellor between 2005 and 2015. 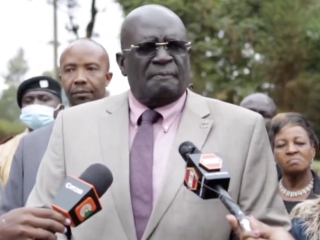