After being brutally attacked in August 2022, Joyce Aoko, a Kenyan citizen, has been evacuated from Albania and is scheduled to return to Kenya today.

The State Department for Diaspora Affairs in a statement said it received information from the Kenyan Mission in Rome on January 11, 2023, regarding Aoko’s plight and her need for specialized neurological care that was not available in Albania.

Aoko was hospitalized for treatment following the attack and has been in critical condition.

“Aoko was brutally attacked by unknown persons at her place of work in August 2022 which led to serious injuries. She was hospitalized for treatment and has been in critical condition. Unfortunately, she needed specialized neurological care which was not available in Albania,” the statement read in part.

The State Department says it determined that it is in Aoko’s best interests to be returned home to finish her healing process among her family members.

The ministry also called for the government of the Republic of Albania to launch prompt and thorough investigations to identify and prosecute the offenders.

The government of Kenya has undertaken to facilitate Aoko’s immediate evacuation from Albania, and an aircraft transporting Aoko, her mother, and a medical team left Albania today and is set to arrive at Wilson Airport at 8.00 PM.

The Principal Secretary for Diaspora Affairs, Roseline Njogu, will be at the airport to receive Aoko, who will then be taken to Kenyatta University Teaching, Referral & Research Hospital (KUTRRH) for further treatment.

The State Department will also offer free counselling services to Aoko’s family before and after her arrival. 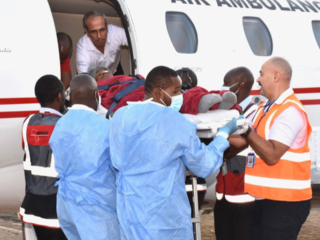