Kenya’s Amos Kipruto conquered quality and won his first major championship following a spectacular breakaway from the pack in the TCS London Marathon.

The men’s race started faster and more consistently than the women’s race, but the event proceeded in a similar manner, with a group of seven men running together through the early checkpoints. They ran 5km in 14:45, 10km in 29:26, and 15km in 44:20, implying a time of under 2:05.

Kenenisa Bekele was conspicuous in the front pack, but defending champion Sisay Lemma remained near the back of the race. Bashir Abdi, a world and Olympic bronze medalist, and Kenya’s Amos Kipruto were also in the running.

They reached 25km in 1:13:41, still on track to finish in under 2:04 and with the same seven men running together. Bekele began to fall off the pace of the lead pack at 33 kilometers, but he stayed in the race and maintained the leaders in sight.

Kipruto accelerated away from the rest of the pack around 15 minutes later, at roughly the same point on the track that Yehualaw made her move in the women’s race, built up a substantial lead in a relatively short period of time. A 4:21 split for the 25th mile proved pivotal, and it was quickly evident that he would win.

Kenenisa Bekele fell out of the lead pack early on but managed to stay competitive and finish fifth ahead of Birhanu Legese and Sisay Lemma. 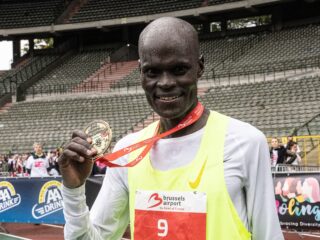