Former President Uhuru Kenyatta, who is currently serving as the facilitator of the East Africa Community (EAC) led Democratic Republic of Congo (DRC) peace process, has expressed deep concern over the sharply deteriorating situation in North Kivu in the DRC.

Fighting has broken out between various armed groups as well as between the FARDC and the M23.

In a statement, Kenyatta said, “Once again the Facilitator calls for cessation of all hostilities and adherence to the Luanda Agreements and a return to the Nairobi Peace Process on consultations to build peace in the DRC.”

The situation in North Kivu is dire as hundreds of thousands of people have been displaced by the fighting between the M23 rebel group and the Congolese army.

Many have sought refuge in churches and schools. The trauma of what they witnessed and endured at home remains with them.

Kenyatta expressed serious concern for the targeted killings of civilians by armed groups and the thousands of internally displaced people resulting from two days of fighting in the region. He urged the DRC government and the international community to step up their support to the IDPs.

“I urge the DRC government and the international community to step up their support to the IDPs,” Kenyatta added.

He has so far facilitated three peace negotiation meetings in Nairobi between the rebels and the DRC government.

On Monday, January 23, Kenyatta met the technical team of the technical advisory team on the EAC peace process in the DRC ahead of the fourth consultative meeting slated for mid-February. 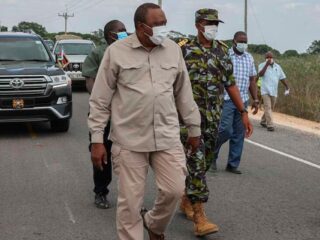