Azimio to IEBC; Open the servers

The Azimio la Umoja One Kenya Coalition has challenged the electoral commission to allow a forensic audit of its servers to dispel claims by a whistleblower that Raila Odinga won the August 9, 2022 presidential election.

Led by Wiper leader Kalonzo Musyoka and his Narc Kenya counterpart Martha Karua, the coalition yesterday said it is not too late for a forensic audit of the Independent Electoral and Boundaries Commission’s (IEBC) servers to get the truth on the actual votes garnered by both Odinga and President William Ruto in the polls.

The coalition on Tuesday provided what it claimed is fresh evidence indicating that Odinga won the presidential election but was rigged out.

The recruitment process for the new Independent Electoral and Boundaries Commission (IEBC) chairman and commissioners is set to start after senators approved a bill on a panel that will conduct the exercise.

Some 28 senators voted in favour of the IEBC (Amendment), bill 2022 that changes the composition of the selection panel.

The legislators passed the bill without any amendments after the senate’s Justice and Legal Affairs Committee chairman Hillary Sigei withdrew all the amendments that his panel had proposed to the bill that originated from the National Assembly.

The bill sought to have radical changes in the slots for nominating bodies to the selection panel picking commissioners to the electoral agency.

The changes included reducing the slots for the Public Service Commission (PSC) nomination from two slots to one.

It is left to President William Ruto to assent the bill to law, which will begin the process of appointment of new Commissioners for the electoral body.

According to data from the National Transport and Safety Authority (NTSA), Northern Bypass, Kangundo Road and Mombasa Road are among the roads that have recorded the highest number of accidents in Nairobi.

The study, which was compiled by the roads agency between January 1 and December 31, 2022, found that the Northern Bypass is Kenya’s most dangerous road, overtaking Outering Road.

The data also revealed that Nairobi has the country’s highest number of dangerous roads. Of the 273 accident black-spots countrywide, more than 70 or about a quarter are in Nairobi.

The Kenya Revenue Authority (KRA) will conduct a census of landlords’ properties and seek direct access to M-Pesa transactions in efforts to catch tax cheats and raise an additional KES 375 billion for the year starting July.

Treasury has disclosed in its budget planning document for the new fiscal year that the KRA’s tax system will be integrated with those of telecommunications firms. This will offer the authority unrestricted access to taxpayers’ bank and mobile money accounts as part of the efforts to catch tax cheats and improve revenue collection as its targets continue to rise.

KRA will conduct a census of rental properties and link its tax system with the digital land registry to smoke out landlords not paying their full share of taxes.

Landlords with annual rental income of between KES 288,000 (KES 24,000 per month) and KES 15 million (KES 1.25 million per month) are required to file a monthly tax return declaring the gross earnings rent from which tax payable is computed at the rate of 10 percent.

The KRA is buying a geographical information system (GIS) that will help map all the buildings in the country.

Access to Safaricom’s M-Pesa transactions would give the taxman a treasure trove of financial information for use in tracking tax evaders.

The tragic death of 12-year-old Mercy Munjiru Maina, who was electrocuted by an illegal electricity connection in Kiamaina slums on the outskirts of Nyahururu town, has sparked calls for justice.

Mercy, who was the seventh-born child of a family of nine, had accompanied her peers to fetch water at Gathara River before she came into contact with the live wire.

The wire had been illegally connected to a neighbour’s wire mesh fence which she had leaned on at some point. Her mother, Nancy Wanjiru, described Mercy as the most hardworking of her four daughters.

Her father, Peter Maina, is demanding justice and local community leaders have urged the homeowner, who has gone into hiding, to surrender to the police immediately.

Reprieve for Madoya and Kipyegon over match-fixing ban

The players were able to play for their clubs this season, thanks to a temporary restraining order from Sports Disputes Tribunal Judge John Ohaga.

Both Madoya and Kipyegon had previously played for former top-flight minnows Zoo Kericho who were caught up in the middle of the chaos.

Six of the 15 suspects are ex-Zoo players.

Olympic champion Usain Bolt is seeking to recover more than $12.7m that his lawyer says he has lost due to fraud.

The 36-year-old retired sprinter had investments with SSL for over a decade.

“We will be going to court with the matter if the funds are not returned,” lawyer Linton Gordon said.

“It is a grave disappointment, and we are hoping that the matter will be resolved in a way that Bolt will recover his money and be able to live in peace.”

Press Review: The day’s top stories at a glance 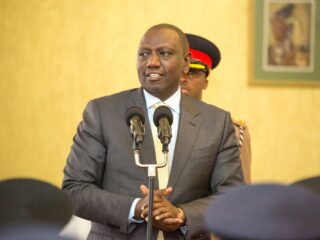