Thrillers to keep you occupied this Halloween and beyond

Nothing gives edge-of-the-seat excitement like a good horror. Well done horrors and thrillers allow us to travel into the minds of characters we couldn’t imagine inhabiting and offer wonderful insights into the human psyche.

For those of us destined for the indoors, here are a few cinematic jumps to keep you cozy this Halloween night and hopefully long after.

The Haunting of Hill House

This Netflix series is set in two Americas: the first is a 1990’s suburban summer haze where the Crain family are fixing and living in the titular Hill House, hoping to sell and move to a forever home.

The second is present-day America, with the Crain family scattered and on the run from their past.

The series toggles between the past and the present as the mystery at the core keeps the family attached to and on the run from the house. The tension builds into a crescendo tying the story with a neat bow that’ll stay with you for a while.

A real horror, this one is for viewers with an appetite for thrills. Honourable mentions include: The Haunting of Bly Manor and Midnight Mass, all produced by the same filmmakers.

Jaws is a Steven Spielberg movie released in 1975 that follows a blood-thirsty great white shark that’s stalking the waters close to a beach resort.

Attacks on holiday-makers prompt a hunt and kill search party’s foray into the ocean. Within no time the hunters become the hunted and cinematic history is made. The movie is tense and will leave you on the edge as you anticipate the shark’s next move.

Give yourself a proper thrill and watch it at night: Unless you are scared a shark will come at you from your toilet bowl, this one shouldn’t keep you up at night. Jaws was recently added to Netflix.

A proper horror movie: religious symbolism and all

The Conjuring is a haunted house horror movie that follows a family’s attempt to expel an evil spirit from their newly purchased farmhouse.

After a few eventful nights, the children’s mother seeks intervention from paranormal hunters, but with every new discovery the malevolence escalates.

Full of religious references, and excellent filmmaking, this is a terrifying movie making it a daytime watch for most. The Conjuring is also available on Netflix.

Stranger Things is a sci-fi drama set in the 1980s that kicks off with the arrival of a mysterious short-haired young girl just as a boy of similar age disappears. This wouldn’t be classified as a straight-up horror, but the thrills do ratchet up as the mystery unfolds.

We mostly follow a group of pre-teens as they navigate nerdom, enter adolescence, harbour a mysterious runaway and  search for their missing friend.

Part mystery, part thriller and part comedy the series ebbs and flows through genres with ease giving the audience time to digest the themes. This one is okay for night time viewing, and is best enjoyed in a group.

Another series that serves up some thills but isn’t a hardcore thriller, this amazing adaptation of the DC comic book of the same name interrogates human nature and the dance between good and evil.

Created by the graphic novel writer Neil Gaiman, The Sandman story follows Morpheus, the King of Dreams, as he searches for his deadly creations that have left the dreaming and wondered into the waking world.

If it’s horror and thrills you want episode 5 and every single time The Corinthian unleashes his eyes ought offer some discomfort.

Live a little and watch this in the dead of night with nothing but your dreams waiting at the other end. 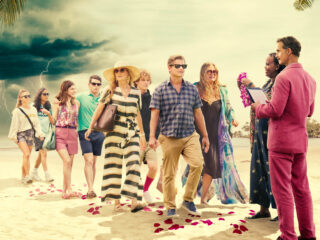 The Watchlist: Nafsi, White Lotus, Succession and The King

Affordable container houses for your next home || #TujengeOnNTV

Thrillers to keep you occupied this Halloween and beyond